Last week, my iMac failed to boot and i kept seeing a folder icon upon booting the machine. I later learnt that it meant my physical harddrive finally gave in after several years of usage. So it was time to upgrade to a new hardrive. I bought a Seagate SATA II 320g HDD and proceeded to replace my old harddrive. Follow this useful guide: http://gigaom.com/2010/05/17/how-to-replace-your-imacs-hard-drive/

Once the harddrive was installed, i installed a new copy of Lion OSX 10.7. Everything went smoothly but one thing i notice which was different was that the fan was spinning at full speed making a really loud noise. So first thing i did was to google to see if i can find some help. After couple of hours trying out some of the advice i found on forum and Apple support, it still didn't help. At this point, i really thought i had purchased the wrong Harddrive brand because i discovered it was a Western Digital harddrive that was in the iMac originally. However, after some tweaking in placing the hardrive temp sensor, it finally worked and the loud fan noise was gone.

Eventually, i worked it out. i was supposed to place the harddrive temp sensor on a small round metal plate as shown in the image below. 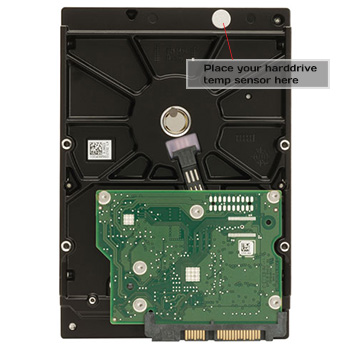 I hope this helps for those that are using Seagate hard drive on an iMac (mid 2008).