Earlier today i was clearing out some old junk and found a few harddisk drives lying around that i had forgotten about. They were covered in dust, so must have been a few years old. Either way, this is great i can use them as an external backup disk for my server. 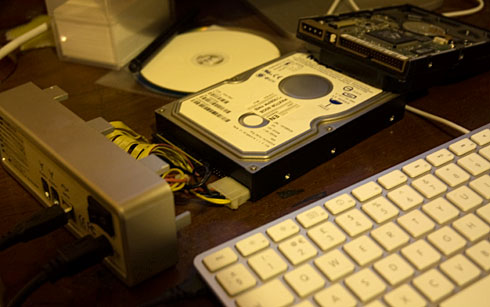 I attached each of the old harddisk to an USB 2.0 External Drive Enclosure Kit one at a time connected to my Mac. There were 3 old 80GB harddisks, two of them worked fine as they were from an old Windows PC and was used as a slave drive for data only (no OS installed) until i connected the final harddrive. All of a sudden it could not be initialised and read on the Mac. Not convinced that it might be a faulty disk, i searched the web for an answer. It turns out that Mac wasn't able to access ext2 file system so it could be a possibility that the disk had an old Linux OS installed on it.

Now the question is how can i access a Linux file system? Another search on the web lead me to a Mac application on SourceForge.net that allows users to be able to mount a Linux file system onto a Mac. This piece of application is called Mac OS X Ext2 Filesystem (ext2fsx) and does just that, plain and simple. Once installed and system restarted, i gave it another go at mounting the disk. Right enough, it had Linux OS installed on the harddisk and i was immediately able to read the content of the disk. What a great little program but the only downside is that it is read-only access and you could not write to the disk.