A friend was moving house a few weeks ago. During the clear out, he found his old Macbook dated back to 2008. He asked me with i can upgrade to MacOS latest version so he can give it to another friend to use as he didn't need it.

The latest version that will run on Macbook 2008 is El Capitan and that is already an unsupported version to date. Any other MacOS version after El Capitan does not support any Macbook older than 2009. However, a quick google search reveals that there is a workaround to install Catalina on unsupported Macbooks. I really didn't like the idea of having to use a patcher as that seems like a hack. Besides, i was concern the Macbook 2008 would be too slow to run Catalina MacOS.

I decided the best option would be to install Linux and since I have always preferred the MacOS graphical user interface, why not setup a challenge and run Linux but provide a Mac user experience.

I set out looking for a Linux distribution that was MacOS inspired. Elementary OS 5.x was one of them i discovered. This Linux distribution was based on Ubuntu and it was pretty and just as pleasant to use as the MacOS itself. However, it was still a bit buggy and the wired network and wireless was not functioning. It would have taken a lot of work just to get the wireless working on Macbook 2009. I'm sure Elementary OS works fine on many PC laptop. I also tried a few other Linux distributions before settling on Ubuntu 20.04 as it just worked out of the box and i also found a Mojave MacOS theme for it.

After an hour installing, configuring and compiling a few sources, this was the result. 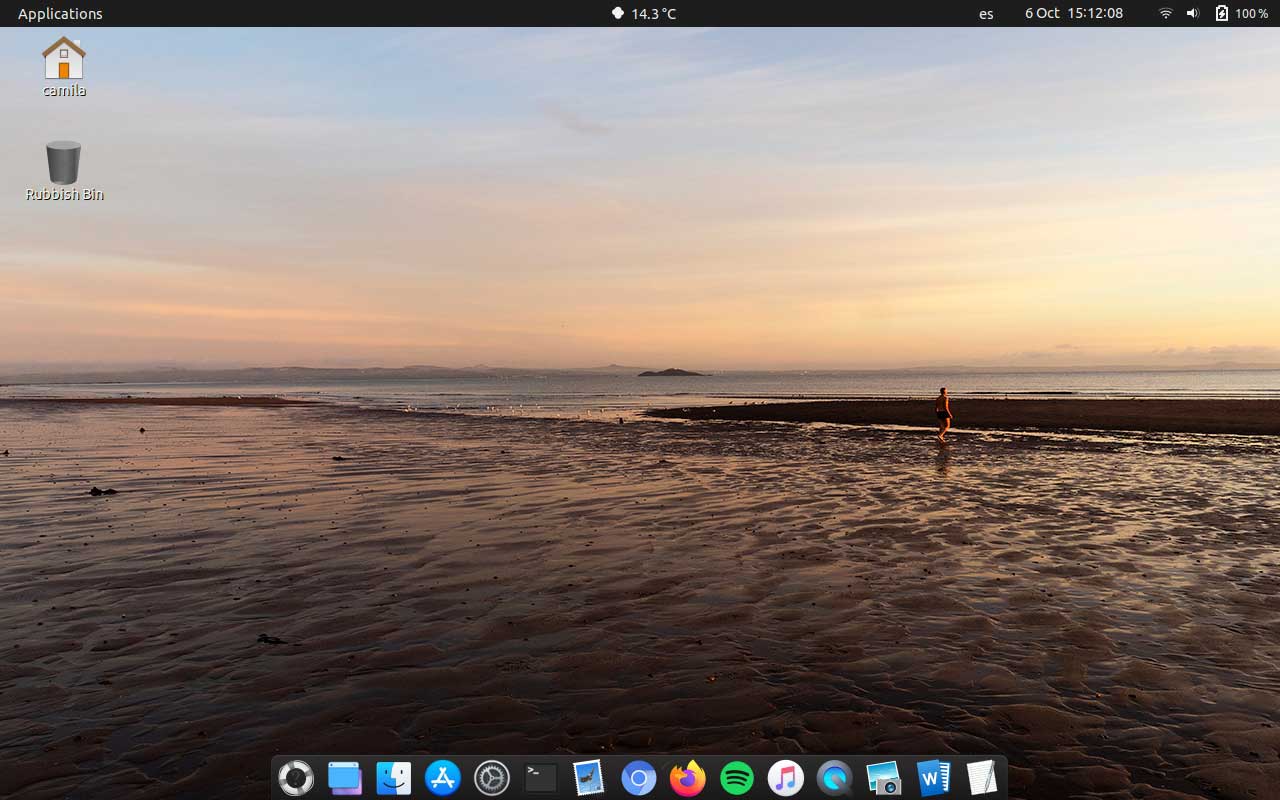 I am pleased with this and can safely pass this onto my friend who i hope will be happy.

I have to admit, the machine was still slow but it is an aging machine with only 2GB of RAM. If it had been a much more powerful machine, i would have installed Play on Linux so it can run most Windows software and games that are not available on Linux.

If you are impressed by the results and so happen to have a working old Macbook 2008 lying around but not sure what to do with it, perhaps want to run this same setup?

Before we start, it is assume you know how to run some basic software installation and Linux commands.

You will need to download the ISO image and create a bootable USB so that we can begin the installation process.

Once you have created a bootable USB, plug this into Macbook 2008 and boot up your machine as usual. Upon hearing the startup chime sound, hold down Option key (that is the key that sits between the ctrl and cmd keys). Hold it down until you see a drive on the dispaly screen that says EFI boot. Click on the arrow for this drive to boot into Ubuntu.

You can now begin the installation process, see this guide for more details

Once you have installed Ubuntu 20.04, i always make sure i am running the latest build. To do this, open up your terminal and type:

Note: I was getting an error after updating my system and restarting it.

To fix this error, we have to replace shimx64.efi with grubx64.efi. Open your terminal and type:

There are 2 ways of installing software on Ubuntu. You can use the terminal (command is: apt install ...) if you know the package name or use 'Ubuntu Software' app. You may also come across package installer, these are files with a .deb extension (you jsut need to double click on it to install). I did experience a minor error when using Ubuntu Software to install and uninstall software. The error i was getting:

It is a minor permission issue so nothing to worry about but it is annoying. To fix this:

Or in your terminal, type:

and restart your Ubuntu Software.

At this point, go ahead and install software you want to use. I installed VLC (video player) and Evolution (email client) because i think they are better than what came out of the box in Ubuntu. If you want an email client that looks like MacOS mail, try out Mailspring. Even though, Mailspring is a great looking email client, I never bothered with Mailspring because all emails pass through Mailspring server, apparently.

If you want certain application to be the default, use 'Default Application' app to set it.

How to install macOS theme on Ubuntu 20.04 (Focal Fossa) Linux

These are some of the Gnome extensions i installed:

Frippery Move Clock - move the clock to the right.

OpenWeather - Add weather to the panel.

Refresh WiFi connection - One minor annoyance in GNOME is that the Wi-Fi Networks dialog box does not have a refresh button on it when you are trying to connect to a new Wi-Fi network.

Remove dropdown arrow - The Remove Dropdown Arrows extension removes the arrows on the panel that signify when an icon has a drop-down menu that you can interact with.

To install this app, you will need the following packages installed in order to compile gdm-background:

make and gcc is already installed so you need the other 2 packages. Open a terminal and type:

Now we can install GDM-background:

You can go grab a coffee while it is compiling the code.

To launch GDM-Background, you should be able to find this in your application launcher, otherwise just type in your terminal:

To set your own background image, just drag and drop an image into GDM Background app. Restart your system.

Tags
Linux
Ubuntu
Debian
Hi, Thank you for your post ! I just installed Ubuntu 20.04.1 on my Macbook 2008 it seems would be really usable, unless… my Wifi does not work. That's very bad ! Did you experiment issues with Wifi too ?
Permalink
My Wifi just worked during installation. Had no issues. I have recently discovered there is a better way and that is installing Mint Linux. It requires less work https://www.omgubuntu.co.uk/2018/07/linux-mint-cinnamon-mac-theme
Permalink
Hi thank you for your answer ! I finaly found the answer to the problem at https://ubuntuforums.org/showthread.php?t=2391053&page=2&s=d243e431b70f2096e87282fcf9113cca
wildmanne39 explains the following
Please do:
sudo apt purge bcmwl-kernel-source
Then:
sudo apt install firmware-b43-installer

Permalink
Nice one! I'm sure that will be a big help to many other users because getting wifi working under Mac for Linux always seems to be troublesome (even in many other Linux distros).
Permalink